Celebrating 125+ years of Service in the Lompoc Valley

The Assumption of the Virgin Mary is celebrated in the Anglican Communion on August 15th.  As of Sunday, August 13th, 2017, St Mary’s, celebrates both the feast day of our patroness and the 125th anniversary of our parish.

The establishment of the Episcopal Church in the Lompoc Valley stems from the efforts of a group of dedicated women who formed the Guild of St Mary at their first meeting on December 2, 1891.

The first Holy Communion was celebrated in January 1892 when the Southern Convocational Missionary of the Diocese of California visited Lompoc.  In June of that year, 16 people were confirmed into the Episcopal Church by the Right Rev Bishop W.F. Nicholls.

On June 7, 1894, Albert and Thomas Dibblee of San Francisco, who were owners of most of Lompoc Valley before the establishment of the Lompoc Land Colony, gave St Mary’s Episcopal Church eight lots for a building site.  During the remainder of 1894, the congregation held services upstairs in City Hall while they raised money in a building fund.

The church was constructed during 1895 on the southeast corner of Chestnut and H Street and formally dedicated by the Bishop of California on November 27, 1895.  He appointed Rev George Cadell Mitchell as Mission Priest-in-Charge.  Dr C.E. Maimann built the pulpit and John P. Gury made a cross, covered with gold leaf that, after its erection on top of the steeple, could be seen for miles.

St Mary’s was moved across Chestnut Avenue from the SE to the NE corner on H Street (now Highway 1).  The cornerstone was re-laid on March 25, 1928.

Between 1893 and 1957, 25 different priests, chaplains, deacons and lay readers had served the congregation of St Mary’s.  In 1954 a large 200-pound bell from Rinconada School was installed in the steeple.  However, as a result of commercial rezoning action and the sale of the church property to Associated Oil, St Mary’s Episcopal Church was completely torn down in 1959. 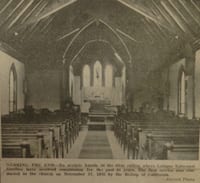 During the period when the old church was sold and torn down, Vicar Philip Schuyler conducted services for the St Mary’s congregation in the Chapel of the Army Disciplinary Barracks (now the US Penitentiary).  A plan for a new St Mary’s progressed and the third St Mary’s church building in Lompoc was dedicated by the Right Rev Ivol Ira Curtis, Suffragan Bishop of Los Angeles on October 23, 1960.

Much of the “old” St Mary’s church remained as part of the new church.  The 200-pound bell still pealed out the call to service.  A beautiful stained-glass window from the old church was installed in the Narthex as an ever-present reminder of the beauty of the old church.  Also in the Narthex hung the sanctuary lamp from the first St Mary’s church.

In 1963, the Bishop of Los Angeles appointed a new Vicar, the Rev Jess E. Taylor.  Under Fr. Taylor’s guidance, St Mary’s achieved self-supporting parish status in January 1965 after being a mission for over 72 years.  The Vestry of St Mary’s called a new Rector, the Rev. Stuart G. Fitch, in 1968.

In 1972, a series of stained glass window panels, which had been installed in the west end of the church were dedicated.  Described as “The Adam Window”, they were dedicated in memorial to Kenneth L. Adam, the late publisher of the Lompoc Record.

In 1973, the altar in the church was redesigned into an “altar-in-the-round”” as a memorial to several parishioners with the work overseen and completed by the people of the parish.

St. Mary’s remained in the Central Avenue location for more than 30 years, until development of the Mission Plaza Shopping Center necessitated yet another move in 1990.

Plans for our current campus at “the church on the hill” were developed and implemented; and after four years of holding services in a local warehouse, we dedicated our current, lovely sanctuary in 1994.  A classroom annex and parish hall was added in 1996.

The stained glass panels from the former church were reinstalled and the sanctuary features the same “altar-in-the-round” design.  Other stained glass windows featuring St George and St Cecelia and the Christos Rex window from the original church complete the interior.  Between 1990 and 2007, several priests have served the congregation.  Since 2007, the leadership of Cannon Michael Cunningham has blessed us.  Under his guidance and with the help of Bishop Jon Bruno, we paid of our mortgage in 2012.

However, St Mary’s is more than buildings and stained glass.  We would not have survived our first 125 years without her people supporting one another and trying to do God’s work by serving the Lompoc community and outreaching near and far.  Our ministries and outreach include feeding the hungry, dress for school, Angel Tree, the Redshirt Project, First Nations Kitchen and supporting other local non-profits and community programs.

We are proud of our heritage in Lompoc and will continue our work here, “With our hands on the plow” with God’s help! 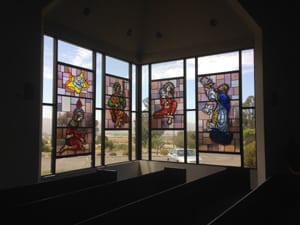 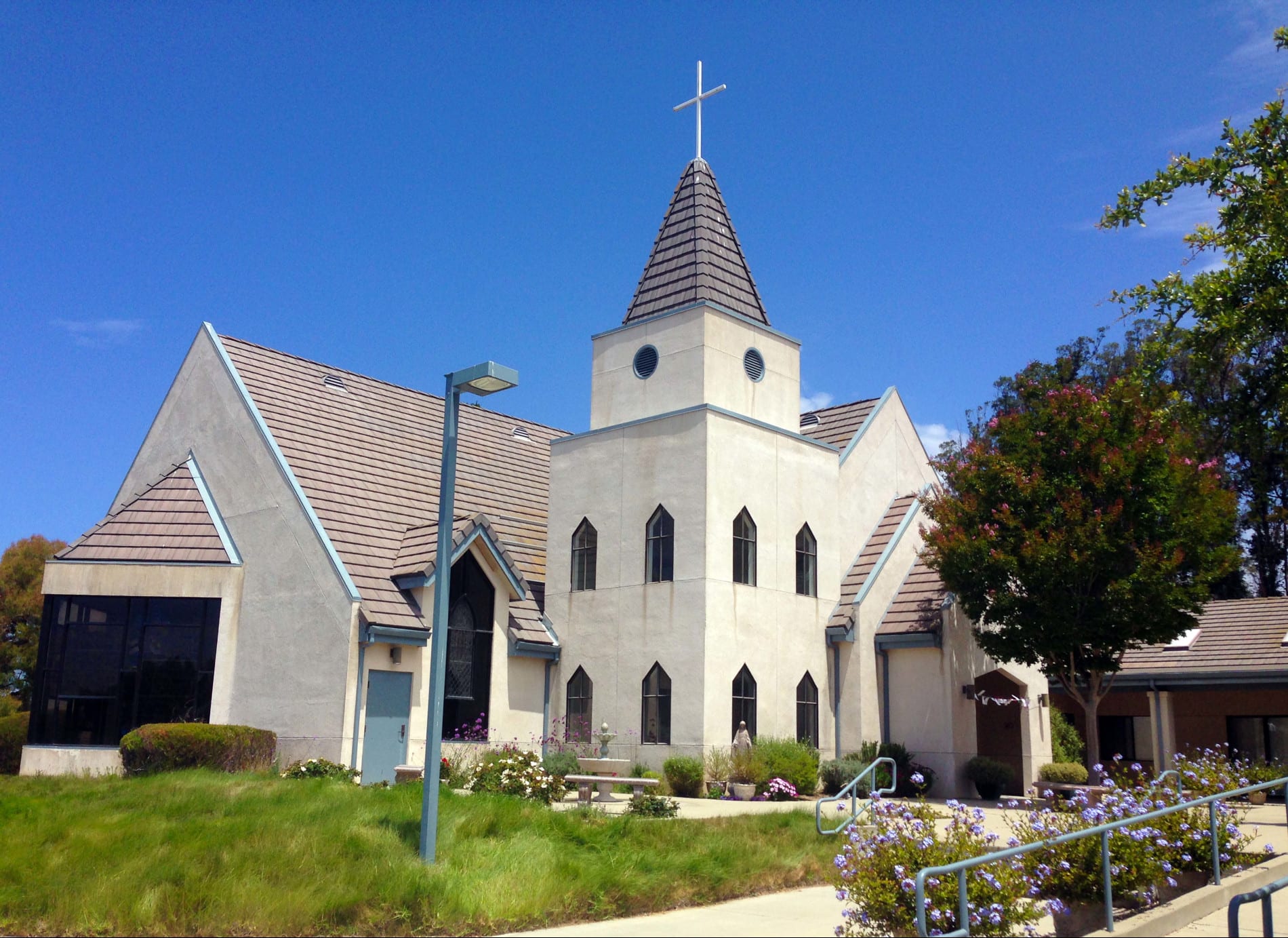